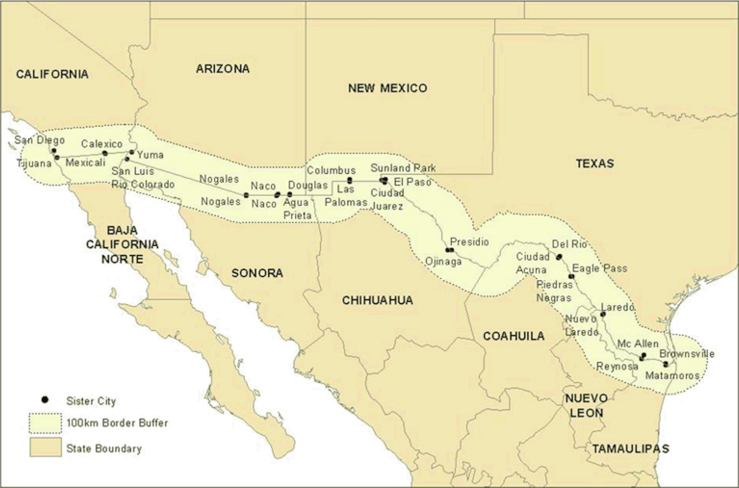 ECONOMIC DEVELOPMENT VERSUS POLITICAL EXPEDIENCY
This economic development program offers an alternative solution to the simple barrier wall currently proposed by the administration to secure the border between the United States and Mexico.

SIMPLE INFRASTRUCTURE
The program proposes to design and construct an International Salt Water Conveyance Facility along the 2,000-mile border between the two countries that is essentially nothing more than a partially buried over-sized monolithic concrete and steel box culvert.

SALT WATER RIVER
This multi-functional facility would primarily serve as a conduit for transporting unlimited quantities of salt water from the Pacific Ocean off the coast of California, through currently uninhabitable desert wastelands in four states and twenty-one counties, to the Gulf of Mexico off the coast of Texas.

IRRIGATING THE DESERT
The exposed portion of the 2,000-mile long box culvert would support an array of solar-powered desalination units for irrigating vast stretches of empty desert on both sides of the border and turning them into agriculturally productive properties.

ELEVATED INTERNATIONAL HIGHWAY
In addition to serving as an enclosed concrete salt-water riverbed, the top surface of the box culvert would function as an elevated international highway serving commercial interests in both sides of the border.

ELECTRICAL SERVICES
A separate chamber inside the culvert would serve as an enclosed utility corridor providing electrical services to communities in both countries using the flowing salt water to power electrical generating units along the route.

FREIGHT TRANSPORTATION
Another enclosed chamber would be set aside for transporting containerized goods along the route.

GOVERNMENT SPONSORED-PRIVATELY FUNDED
The US government would fund the economic feasibility study required to undertake such a venture. Private equity funds from investors in both countries and around the world would be used to finance design and construction of the facilities in exchange for concession rights along the route.

A GLIMPSE INTO THE FUTURE
This program will serve as an example of how all infrastructure development schemes will be conceived in the developed industrialized world in the future, as multi-functional, government sponsored, privately funded commercial undertakings employing maintenance free, low cost, monolithic concrete structures.

ECONOMIC DEVELOPMENT VERSUS POLITICAL EXPEDIENCY
The monolithic concrete and steel structure will cost less to build than a conventional reinforced concrete barrier wall and pay for itself many times over by having economic development as its primary purpose as opposed to political expediency and law enforcement.

A PHYSICAL BARRIER THAT SERVES AS AN ECONOMIC BRIDGE TO THE FUTURE
The International Salt Water Conveyance Facility will act as a physical barrier to prevent illegal cross-border activities and reduce if not eliminate the need for and cost of maintaining an army of border patrol guards. At the same time it will promote long-term economic development activities on both sides of the border benefiting future generations for years to come.